Day 2 of the diet. Special K for breakfast. I didn't drink as much water today as I should have done. Mid morning I had a low calorie snack with my tea. For lunch, another bowl of Special K. The banana and apricot one is really good. When I went for a walk at lunch time, I was picking and eating the cherries as I went. There are trees along the whole road down to the lake. During the afternoon, I munched on carrots and had another low calorie snack.

In the morning, the milk ran out while I was making my tea. I decided to tackle changing it on my own. I had to undo the box to find the spout thing. Tracy joined me. We wrestled with it together and then noticed that the box was leaking. I got milk dripped down my dress. When I told the girls later, Glynis put a warning note on it: “Box may leak when removed”. Later in the day, a note appeared on the fridge: “If you pull the handle, the door will open!” We haven't found the funny culprit yet! 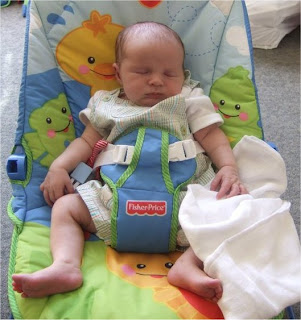 This evening, I was invited to Heather and Andy's to meet baby Michael Andrew. He makes his Moses basket look enormous at the moment. We chatted and watched him for a while as he was still asleep and looking like he was dreaming. They pull some of the cutest faces when they are sleeping. When he woke up, I got to have a cuddle. He was also pulling some cute little faces while he was being cuddled too. He has lots of lovely black hair and deep blue eyes. It's so easy to forget that they start out so small. When it was time for his nappy change, I found the feet before they were wrapped back into the baby suit. When I left he was having his milk.

We didn't exactly eat healthy. Mr Brain's faggots (probably not on the Special K recommended meal suggestion list), mash potato (low fat margarine of course), sprouts and peas. It was good though and I'm not hungry... yet! I was planning on staying away from the alcohol but I had a small glass of port. It's Dave's fault!! At least he has eaten all of the smelly Camembert now that has been stinking our fridge out for ages. We watched “Underworld: Rise of the Lycans”. I've seen it a few times but Dave hadn't. I then watched “Knowing” that I hadn't seen before. It was exciting. Another Nicholas Cage film to add to my collection one day. I might have to suggest it as one that we could watch at Chris's too.
Posted by Tia