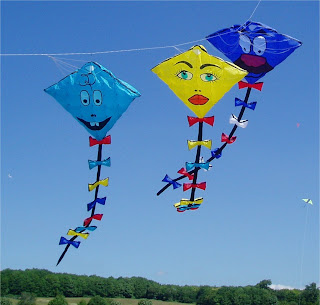 The boys went out shopping after breakfast while we continued our lazy morning. Lisa and I had been wandering around the stalls when we had the call that they were on the way back so we met up with them at the bottom of the field to help back with the shopping. No cars are to move on site while the festival is on, between 10 and 5. It was lovely not to have to go shopping for a change. With the lack of refrigeration it is better to buy the food as we need it. The breakfast stuff survives the weekend as it starts out frozen and stays in the cool box. We've learnt now that frozen vegetables do not keep well. 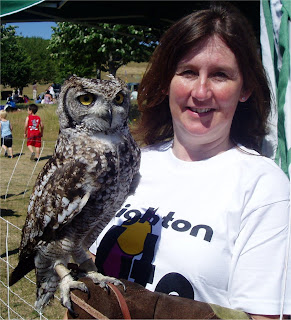 Several of our number soon disappeared to help with the Children's kite workshop. Paul and I had a wander for a little while playing with the binoculars. We got an ice cream and watched the kites for a bit and then we went to see the owls. They were all hand reared from very young and quite happy being admired by all. Kat and I held one. He was very sweet. Their feathers are almost silky. We had a look at a fire engine and Paul had a sit in the cab. We waited for Dave to finish at the workshop and went to find the reel that we had reserved for my spirit kite. It was worth checking out the prices on the reels as they varied greatly from stall to stall. Dave bought a new kite, covering all the colours that he didn't already have in his new colourful shirt and shorts. Sometime later, he had to rescue it from the tree. We got photographic evidence to squeal to Collin with later.

I had a call to say that the spirit fly in the arena was to be at 5pm. I started to wander down there with Kat about quarter to and could see others already in the arena, so I had to run. It was a bit of a rush setting up and my lines were a bit tied up. With help I soon got it into the air.

Lisa cooked dinner this evening. We had bolognaise wraps. Rice was also cooked to add to the wraps. It went down well, if a bit messy. After dinner, we wandered down to join the BBQ people as Simon had asked us to. Corinne got the award this year for all her hard work. It was soon time to get back to our camp and the girls went mad collecting lots of wood for the fire pit. Paul and Alfie helped break up the twigs which was funny as they were thinking they were really strong. We soon all settled down with more of Batty's cocktails and a variety of Purple Rain. There was 22 of us around the camp fire at one stage during the evening. More wood got added to the fire slowly, until the pyromaniac arrived and fed it everything we had. As if that wasn't annoying enough, some young muscle man (Andrew) was persuaded to dump the biggest half a tree stump he could manage into the middle. How it didn't break I'll never know. It certainly groaned under the extra weight. As our numbers dwindled, there was soon just Mick snoring. We didn't leave him there. Kat got given the job of waking him up and sending him off towards his tent.
Posted by Tia