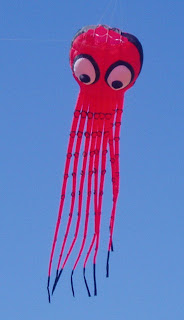 We were all awake and up early. It was too hot to stay in the tent. We stayed there as long as we could but soon had to get up. Even though we were up early, it took a few coffees before we were ready to tackle breakfast. Soon after breakfast, I realised that it was too late to move a car off the field to get some shopping, and as Julie and Mike were off home later in the day, they weren't going shopping either. I wandered down to our fellow campers/caravan friends to see if anyone else was going to Asda later. Sue very kindly offered to take me later in the day, once she'd had a sleep as she'd done an early airport run. We decided that we would go later in the day, possibly after the kite workshop. It rained during the morning and then cleared up again. We continued the lazy morning, apart from Kat who had found lots of energy to practise Capoeira. Emily was learning too which was really sweet.

Spirit fly was about 5 o'clock again. I made sure that I was there ready and waiting. Batty left soon afterwards so that he could get to see Prue before end of visiting time. More and more friends left and it was soon time to cook dinner. Dinner preparation was a joint effort. Dave went to clear the washing up whilst everyone else helped prepare food. Tonight we had chinese chicken with pineapple, served with boiled new potatoes. It was a real team effort, and was enjoyed by everyone.

Soon after dinner, half of our party departed and there was just myself, Dave and Tony left. Once we had packed as much as we could, we grabbed our seats and some drinks and wandered down the bottom of the field as we had been invited to join the others that were staying overnight. It was a fun evening chatting until late.
Posted by Tia