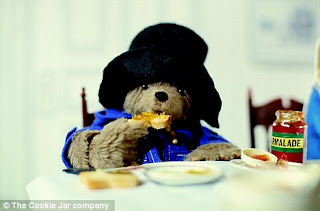 According to a Daily Mail article I've read from the other day, apparently Marmalade sales have dropped. Compared to 2009, 2.5 million less jars were sold in 2010. That's a lot of jars! Apparently sales of oranges and pectin have gone up meaning that instead of marmalade losing out to stuff like chocolate spread and peanut butter people must be making their own. Paddington will be pleased. I think we made marmalade a few times years ago but when you can get a cheap jar for less than 30p why go through the hassle.

At archaeology club, I was given the job of selling the squares for the draw. It's very awkward as I still don't know everyone's name even though I probably email most of them regularly! I think we made £14 profit on the draw. The winner was a newcomer who bought his square at the last minute.

Young Anthony did a talk on his trip to Ironbridge Gorge Museums. He started by putting on his dark glasses which most people assumed were “cool” sunglasses. They were the type of glasses that help him to see the words better. I noticed that his notes were printed in colour too. Gold star to him for having a go. He was obviously still struggling. Many of the adult members wouldn't have the courage to give a talk. Anthony comes along with his Grandma and is the youngest member by about 30 years. This is somewhere that we have decided that we will visit one day. There is also Stokesey Castle nearby to visit, and it's English Heritage!

http://www.dailymail.co.uk/femail/food/article-1349604/Paddington-Bears-favourite-safe-home-cooks-help-preserve-marmalades-future.html
Posted by Tia No comments:

The post franking machine is out of action. Even through we are paying our monthly bill by Direct Debit, when it came to run an upgrade on the machine, we were told that we couldn't as the agreement over our new company name hadn't been sorted out yet. Our receptionist had to go and get stamps from the Post Office. How quaint! The company who lend us the franking machine sent their account manager in. Luckily I didn't have to get involved. She was in our office for a little while. I couldn't tell you what she looked like but she smelt interesting, if you like strong perfume! Not sure what it was. Christine and I decided that it was a good thing that we liked it but Glynis said she didn't. Tony didn't comment! 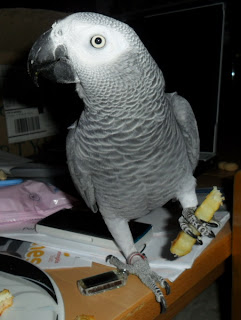 Buffy was very naughty when we were eating our dinner this evening. She wandered across the table to attack our plates. Guess she was searching for chips again. We have found that she loves chips. No such luck tonight as we had chops, mash and peas.

We had a break from Heroes tonight as Chris was working late and wasn't joining us. Dave dug out a Star Trek, Next Generation episode to watch. It was another good one that I'd probably only seen once before. Matter of Time. It has Matt Frewer in it. He is Jim Taggart in Eureka.
Posted by Tia No comments: 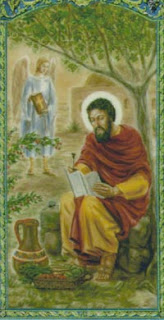 Our manager had been watching a quiz show recently and mentioned that there is a patron saint of accountants. I looked this up:

"The patron saint of accountants, bankers, bookkeepers, security guards and tax collectors is Saint Matthew of Apostle fame, and he also was the author of one of the Gospels. Before becoming an Apostle, however, he started out as a Jewish tax collector at Capernaum. Little is known about him, outside the seven references he has in the Gospels. In medieval art, Saint Matthew is represented under the symbol of a winged man, carrying in his hand a lance as a characteristic emblem - his artistic calling card if you will. He is one of the originals in the pantheon of patron saints."

I've been checking out patron saints on Wikipedia. I never knew there was one for almost every eventuality. Here's one that we're interested in, Dominic – astronomers & scientists. Or how about, Isidore of Seville - computer scientists, computer programmers, computer technicians, computer users, schoolchildren, students.

(Pic from: http://www.drstandley.com/images/saints/St_Matthew.jpg)
Posted by Tia No comments: 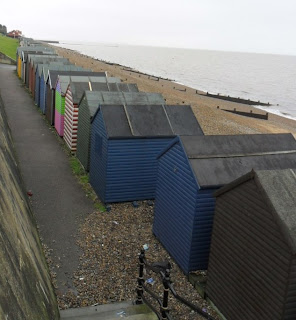 The plan was to be up soon after 8. Apparently I slept through my alarm. I woke up when Dave's went off. I still remember reaching to switch mine off even though it had shut up about 10 minutes before. Bat arrived at quarter past 9 as planned and we went over to MacDonalds for breakfast, collecting Chippy on the way. I had been Mac-lied to. They no longer do Mac-fruit toast. I had a cheese, egg and bacon bagel and a coffee. We left MacDonalds, by luck, at 10 as originally planned.

On the way there, we were threatening to change the “Cars Bought For Cash” to “Cars Bought for Chickens” and discussion ensued with what else we could change the sign to. This is the general sort of rubbish that we find to chat about when travelling.

We found a pay-and-display car park on the sea front. We later found safe parking spaces that we wouldn't have had to pay for but at least the car was safe. We'll know to try the other spaces first in future. We wandered along past the pier, taking photos and choosing what houses we would like on the way. Also checking out the state of the 400 beach huts. Some of them look new and some look like they have seen better days. One was just a lock up box with a surf board padlocked to the outside. They reminded me of the episode of “Keeping Up Appearances” when Hyacinth hires a boat and gets excited when she sees them but it turns out she's got an old wreck. Wouldn't you be disappointed if you walked past all of the lovely ones only to find the one that you bought or rented wasn't.

After about 45 minutes we went up some steps and came back along the road for more nosing at houses and gardens, picking up the beach again near the rocks. I went to take a photo of a statue in the park and there was a moving statue water feature that shouldn't have been there! Oh dear.

We went to The Saxon Shore, Weatherspoons pub, for dinner. For £5.99 we had a pint and a roast dinner. I had Red Castle Cream (Newman's brewery, Caerphilly) with roast beef. We had another drink there before moving on to the ice cream parlour. As I didn't want an ice cream, I had a lovely hot chocolate. We're planning a trip back to the ice cream parlour too for their fish and chips. If you spend £20 or more on fish and chips, you get a free bottle of wine. That would need 3 of you to share as the cod and chips were £7.95.
Posted by Tia No comments: 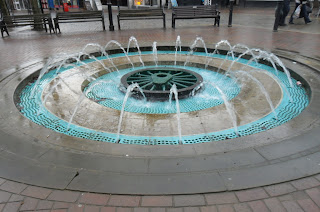 After Dave had gone to work, I was then woken again by a call from my friend's mum. She was worried that she'd missed our silver wedding anniversary. I assured her that it wasn't until October and we had a long chat about “stuff”. I then got up with the intention of doing some housework. The bathroom got cleaned but I mostly spent a lazy morning watching Time Team and Top Gear. Kat came home about midday, and found Martin struggling down the road with an enormous box containing his new bicycle that he'd bought in the sale in the town. How he'd managed to get it this far was amazing but he would have been quite happy to carry it the rest of the way home but we insisted that he wait for Dave to come home to help. Then Chippy came round to take some photos of Buffy. We picked Sofia up and brought the girls back home before Dave and I went into the town. We met up with Martin again and went together to The Gorge. I had Lasagne and chips which was very good. You get some strange people in the Gorge, including us! The guy at the next table dozed off nearly falling into his ice cream. Then a lady sat behind me and was talking very loudly on the phone about how much her magazine and book cost and how she could only afford to buy a plate of chips now and how she would have liked to have had something else on the menu and then proceeded to read out the prices to the poor person on the other end of the phone. Then on with the shopping. Dave is looking for a zip up top that's not boring plain colour. It is not easy to find one at all let alone one with more than one X before the L.
Posted by Tia No comments: 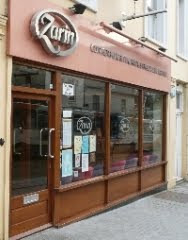 I was invited to join the support team for their night out. Clive came home with me from work so that we could leave my car there and then get a taxi into town. He chatted to Buffy for a bit while I got ready. We were first to arrive at The County. We went for Caledonian as we hadn't heard of that one. It was drinkable but it was a bit watery. I had a second half of this. About 7.30 we wandered round to Zarin's. I had one of the house specialities: Lamb Kaliyan - Thinly sliced pieces of tender lamb, marinated in aromatic spices and tossed with onions, tomato and peppers. It was really tasty. After dinner we had another round of drinks. The new dessert is to ask for “larrrrr gerrrrr”. A great evening was had by all.
Posted by Tia No comments: 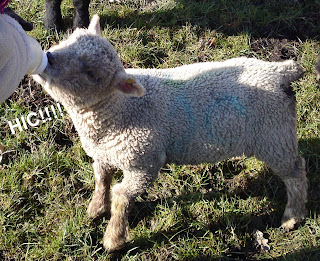 For some reason at work this morning, my manager was recounting her story of drunk sheep in the orchard from eating the fermenting apples. Apparently they made a terrible racket. Guess it was either from being in pain or singing their sailor songs. It reminded me of a recent news story that had similar scenes to those in Flash Forward with the dead crows. After investigation the birds were found to have been intoxicated from pinching fruit that had been fermenting. They died of alcohol poisoning.

One of the young guys at work was asking about sick leave as he has signed up for some testing to be done on his central nervous system for scientific research. Everyone at work thinks he is mad to want to do this. £1000 is nothing compared to what you could lose if these experiments cause side effects.

I checked my blog statistics today as I hadn't checked them for a while. Interesting to see that as well as US and Canada, I have had visitors from India (New Delhi), Indonesia (Jakarta Raya) and Mexico. Welcome to all visitors new and old.
Posted by Tia No comments: 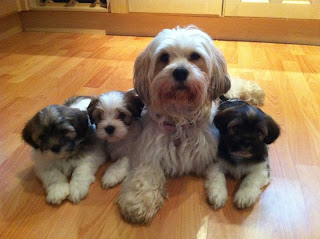 In the evening I went to a Partylite training meeting. Only 4 of us turned up. Glad we did. For getting bonus in November I will get a £10 gift certificate from Karen and I chose a Mercury tealight holder. We got to cuddle the pups too. They are so very sweet. It's a good thing that they are already sold.
Posted by Tia No comments: