I had planned to spend the morning in front of my computer doing more blog stuff or photos but I soon ran out of time. We got the call that Chippy would be here in half an hour. So I made moves to get ready. I ended up having more time to play with my hair and make up as Dave disappeared to the market with Dan so I let Chippy know and he went for petrol first.

We set off before midday and headed for Folkestone. After a quick cuppa, we wandered down to the Wetherspoons in Folkestone for their lovely roast dinner. £5.99 for a roast including a drink. Today they had the double stout. We have now found out that you don't have to make your mind up straight away and order the dessert at the same time as your dinner. You can go back and show your receipt. Dave and Kat braved the dessert. I was restrained and didn't get a bowl of profiteroles. Dave very kindly sacrificed one for me. 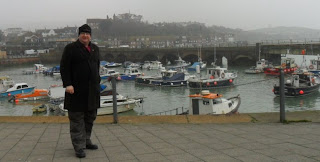 From here we wandered down to the harbour and along the sea front to the coastal park. Kat so wanted to go on the zip line but was afraid of getting a dirty bum. Still a kid at heart but grown up enough to know she didn't want to be dirty. The original plan was to walk back towards the car park and take the lift up but we ventured up the zig zag path. I have taken loads of photos.

Then we headed towards Chambers but apparently they are not open on Sundays. So it was down to The Pullman for the next drink. I had Ruby Mild. It was good but not as good as the stout I had earlier. From here we wandered back via Tescos, laughing at Dave getting stuck on the railings and having to be helped off. After coffee and cake we set off back to Ashford in time for me to get ready to go bowling.

We were asked if we wanted to play our game tonight as Mark in the opposing team can't make it tomorrow. I'm feeling slightly cheated. They wouldn't oil the lanes for us. Apparently it's not cost effective to oil just two lanes! I was assured in the morning that they would be done. After much sulking my Mark, he opted to come back tomorrow morning to bowl when they would oil it for him! We bowled our game with Terry. Terry did OK. Batty did really badly at least 20 below his average. I had two bad games but my last one was OK. Mark will now bowl tomorrow just enough for them to win all 3 games. We are currently just 2 points above them at the top of the league. Now they will win and we end up in 3rd place! Grrr!!! The only advantage I guess is that I can be home tomorrow night for Dave's birthday.
Posted by Tia No comments: 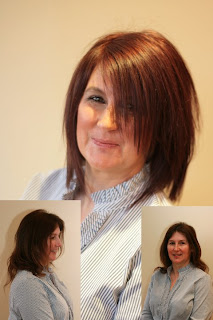 I arrived at Stone's on time at quarter to 11. I was met by Alex from Cheeky Discounts and Colin, the photographer. Sam soon whisked me away to talk hair styles and decide what we wanted to do. We made a decision and she disappeared. Someone came to put the cape, etc on me. Then we went to take the “before” photos so the cape had to come off so that I'd be wearing the same for the end photos. I felt awkward having my photo taken so much with people I'd only just met and was regretting not bringing someone along for moral support. Colin was very good though. Front and side shots were taken. It was then back to my chair where some strange colour stuff was applied to my hair and bits were put into foils. Whatever was left outside the foils was then covered with something that was a strange gold colour. I was then given half an hour for it to develop. I was given a cup of coffee, which we ended up taking to the make up room. The coffee went cold as it was very difficult to drink and have make up done. Two girls painted me with bronze stuff and make up. Alex and Colin came along too and more photos were taken. The girls said that it's not usual to have make up done while wearing foils and hair dye. This was to save time. It was soon after midday that I was taken to the sinks to be rinsed off. Josephine did a brilliant job and made me feel very relaxed. While waiting for Sam to come back afterwards, I got chance to drink my lovely filter coffee. I couldn't play with my phone as the battery was going flat again. Sam then set to work cutting lots of hair off and styling with the dryer and the straighteners. She did a wonderful job. It is cut shorter at the back than the front. She showed me how to blow dry it to give it lift before using the straighteners. The colour is really great too. When we had finished, there were more photos to be done for the “after” look. I saw a few of them on the camera. I hope Colin is going to send them on to me.

I left there before 1 and headed home. We set off out straight away to get to Deal to join Terry and Irene for the afternoon. The weather was awful. When we arrived it very wet so I retrieved the umbrella from the car. Normally I wouldn't bother but with all the work that had been done, I wanted to protect it a little. Terry and Irene had been there since before midday with their friend, Emma and her lovely little girl, Dulcie, who is 5 months old. She is very sweet and not just because she let me have a cuddle straight away! Chippy, Ginette and Emily arrived. Both little girls were angels. Unfortunately, we were too late to get something to eat. After a half of the Cornish stout, I stopped feeling hungry anyway. I switched to the pretend lager after, Becks Blue. It was definitely not as good as the Stout but better than drinking lemonade. We had a lovely afternoon and stayed for ages, even after Dulcie had gone to her Dad. There was just 5 of us left. We had a few more drinks. We talked about going to get Chinese and taking it back to Emma's. We ended up going to an Indian restaurant that was within walking distance. Chilli's. It was down a dark alley and we'd never have found it without Emma.

In the restaurant, Dave gave the waiter a quick lesson on how to make chicken with the napkins. The older waiter was very difficult to understand. We worked out that he was offering us the meal deal of £10.95. This included a starter, a main, a side dish and a rice, where needed. This sounded like the best deal so I had some bhaji's. They were very good. I ordered Lamb Gosht for my main. It sounded really good as it was lamb, mint and ginger and chilli. It was rated as a “medium” so I thought it would be OK but it was a bit hotter than I like. It was tasty but I couldn't manage it all with the chilli in it. The rice was good too. We felt that they were quite small portions which suits me. We're not sure if that is because we were on the “meal deal” or that is standard. Unfortunately, the drinks bill came to nearly as much as the cost of the food. Maybe we'll go for “takeaway” next time!!
Posted by Tia 1 comment: