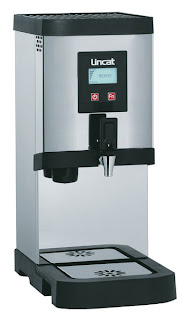 I was struggling to get my City Link stuff packed at 10 to 5, and Deano had arrived to collect too. Barry got called away as there the downstairs kitchen was flooded. The water heater had leaked somehow. Not sure how though. Do they split? There was so much water it flooded out of the door into the carpeted hall way. We don't think any damage has been done to the partition walls as they have an aluminium strip along the bottom. I've been given the job of ordering a new heater tomorrow.

I ordered the new boiler first thing when I got to work and was told that it would be delivered today. As there was no sign of it at 3 o'clock I phoned to chase it up. I was assured that it would arrive but it might not be until after 5. I said that I would wait. It turned up at 5 to 5 in the end. It is a really smart one with a little screen too that shows how warm the water is and how much litres have been used. The filter needs to be changed every 4000 litres.
Posted by Tia No comments: