Just before lunch time today we had a power cut. I got my filing done. About 2 pm, we didn't know if it would come back on again and as the offices were getting hotter, we were told that we could go home. Unfortunately, I didn't run fast enough. The power came back on and I stayed until 5. We did get icecreams though. There were only about 20 of us left. I was on my diet again today, much the same as yesterday. A different note appeared on the fridge this afternoon. “Standing on one leg hopping about increases the risk of falling over. Please be careful”. As there were less people in the office, the mystery note leaver might well be found out. 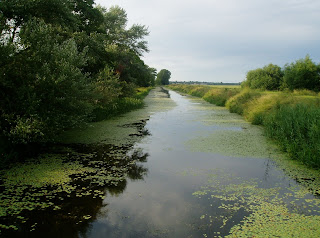 After work we went for a walk in Appledore. We were able to get away before 6pm. The plan originally was just to walk along the canal and back again but the navigator found us a circular route up into Stone in Oxney. By the Royal Military Canal we saw a slow worm, some wood peckers and a very strange fruit tree. The fruit looked like black berries but this was definitely a tree and not a bush. We soon found a place to cross the road and went up the hill into Stone In Oxney. At the top, we found the foot path through the farm, shouted “orses” at the beasts there. The horses came to say hello. We headed up for the church and followed the road and stopped at the “pink” pub, the Crown. We had beer and crisps sitting in their lovely beer garden. It looked like it had all been decorated out recently. Apparently it re-opened in April 2009 after being closed for 3 years. We got an evening menu before we left in case we wanted to go back again. They recommended a phone call to check before turning up mob handed. A short walk on from here, and we found the next pub, The Ferry Inn. We sat in the garden again. Someone came up to say hello to me. We had a chat. It was the voice that I recognised most but it was half an hour later when we had left the pub that I remembered her name. I used to work with her years ago when she was at Planit. I wonder if she remembered my name straight away? Usually I'm really good with names, etc. We followed part of the Saxon Shore Way and soon got back to the car, ignoring the 3rd pub.

We got home soon after 9. The temperature had only dropped to 22 degrees, from 29 when we started our walk. I didn't even need my jacket all evening. It was a lovely walk and we'll probably do it again one day.
Posted by Tia