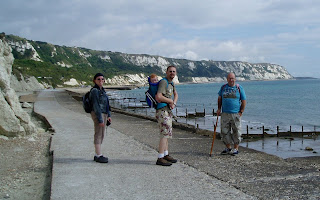 And here we are again, mid-week and heading for another weekend. I’m still suffering with aches from last weekend’s exercise. It was another busy one. As usual, I went to work for a rest.

On Friday, as Dave was working I cooked dinner for myself. Chance to have one of my favourites… king prawns, green beans and tagliatelle. Dave doesn’t like prawns very often. Then we set off to Warehorne picking Dave up on the way. We rushed down there thinking that Elspeth would have started already but as it wasn’t very busy, she didn’t start until gone 9. We had a great time singing some old time favourites and show songs. I think the show songs were more popular as these were easier to join in with. It might have been more useful if our song sheets matched Elspeth’s versions but we joined in where we could and had a good time anyway.
On Saturday, we were out at our usual start time of 11 o’clock, or soon afterwards by the time I’ve got out the door. Today our destination was the Six Bells at Woodchurch. It took about an hour to get there. I ordered omelette and chips, which I may have had last time I was there too. Everyone enjoyed their dinners and a couple of drinks later we set back on our way home via Shadoxhurst for a quick drink in The Kings Head. This seems to be a favourite stopping place just recently. It is a pub that we can easily reach in an evening as it is only 20 minutes by bike and mostly flat if we don’t go via Singleton.

In the evening the original plan was to go to Chris’s as normal but as it was such a lovely evening, Jose invited us to his house for a jacuzzi party. A quick stop via Tescos for snacks and drinks, and something to suitable to wear in the tub for some. We had a lovely evening, taking turns in the tub as it was decided that there is too much water displacement for 4 adults. Later we watched the film “Push” and then another dunk in the tub while those that wanted to watched “A Town Called Eureka”.

On Sunday, after getting our picnic from the local shop (they do great sandwiches, wraps, baguettes, etc for just £1), we went to Folkestone with Chippy, Sammy and Emily, parking up at the bottom of the hill at the Warren with the intention of walking up to Capel. After an hour or so walking we had our picnic in a very peaceful place near the old railway tracks. It was decided that “up” was probably not a good idea with Emily in the back carrier and with it being such a hot day so we walked back a different route which was not as scenic being away from the sea a bit. The little track was surprisingly busy with cars in and out. The campsite down there didn’t look as big as I thought it would be but very cosy and quite secluded. I guess it was these people that were making use of the beach. It was quiet there for an August sunny day.
Posted by Tia 1 comment: