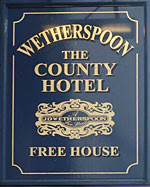 I had such a good day at work that I was able to leave at 5 o'clock. This was good as I was off out with just 15 minutes at home to get ready. Off to Wetherspoons with the occasion sort of being that it's Steve's 40th in two weeks time, with the added bonus of it being curry night. We arrived soon after 6 and joined Steve and Chippy for a drink. We waited for Martin before ordering dinner. Not many places that you can get a pint and a curry for £4.99. I had lamb Rogan Josh. It was very good. It came with a couple of poppadoms with mango dip and a naan bread. I also ordered some profiteroles as that is my weakness. Somehow two bowls were ordered. I ate 6 of the 8. They were good too. To drink, I stuck to SOS. Well, I think I did! I might have swapped with Martin's Ruddles at some stage but the curry tainted my taste buds and I wasn't sure if I was still drinking mine or Martin's after Batty had demonstrated how you didn't need opposable thumbs to hold 3 beer glasses!
Posted by Tia No comments: 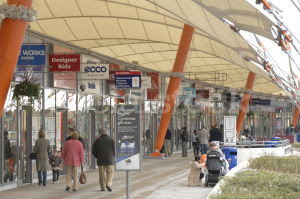 After work this evening, I stopped off at Farmfoods to stock up on a few freezer bits. When I was putting the bags in the car I found a book in there that I was supposed to take back to the shop just after Christmas. I bought it for a present for Martin but it was that good a choice that he already had it. I went straight to the Outlet. I went to the wrong shop first! Ooops. I had forgotten that there were two book shops there now. I found the right shop but they couldn't give a refund as I didn't have the receipt. How difficult can it be to spend about £8? I was there for ages. I very quickly found an Astronomy book that will make a good raffle prize for the club. They also had paperback books that were 2 for £3 so I thought I would get a couple for me and a couple for Dave. I shouldn't really buy any books for myself as I have over 110 of them to read already. Looking forward to the summer when I get chance to read more. I asked the shop assistant if they had any science fiction books. She said that all they had was one Star Trek book. What a strange shop! I managed to find Dave a Michael Moorcock book and a Tolkien book. Hope he likes them. She did try to show me the Warhammer books. I know someone who might be interested but I don't think it's Dave's choice.

Then home to cook dinner. Pasta bake tonight. It wasn't as good as usual as I put it in too early and I think I had the oven too hot. It wasn't that bad though.
Posted by Tia No comments: 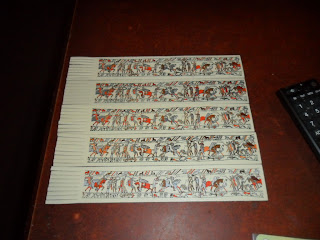 My bookmark collection has outgrown the tin they were in. I had a plan to put them in an empty biscuit box from Christmas. Unfortunately that is not long enough. I found a shoe box to use. I had a count up. There are nearly 240. I have 5 that are the same. Must have been from various visits to English Heritage places. Even when we bought the last one, I still thought it looked cool and I didn't already have it!

This evening we went to Chris's for our “away” meeting. Only 4 of us turned up. We put the world to rights before watching Heroes. It's not what I thought it would be. I'm not sure that I like it. I thought with a name like Heroes it would be more like Superman or something but it's hard to know the good guys from the bad guys. I mentioned to Chris that I might like to borrow the Vampyre Diaries as we had started watching them on Saturday nights. I didn't realise that an episode is only about 350 MB so that they can be copied on to a USB key. Well that's what I've learnt today then!
Posted by Tia No comments:

Today was fairly easy and organised for the last day of the month, although I didn't get the final 12 orders until 4.30. I was packed up by quarter past 5 but then had to wait for the City Link driver. I phoned their office twice and was assured that he was on his way. I waited in the car in the end and he turned out about 20 to 6! For dinner tonight, I cooked chilli and rice. It was yummy. 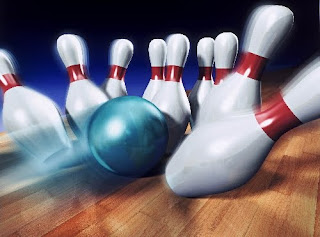 At bowling this evening, we managed to win 6-2. We only lost the middle game by 14 so if I had been playing better we may have won that one too as I only got 107. Then on the final game I got 180. So we stay just two points ahead of the team behind us as they also got 6-2.
Posted by Tia No comments:

The end of another week at work and nearly the end of another month. I can't believe it's the end of January already. It was another very busy day at work with the system not working correctly again. Hopefully it will now be working OK next week. They think they tracked it down to possibly missing quote marks in a new script! 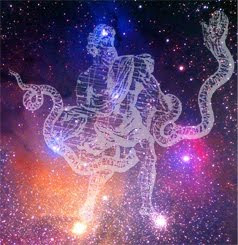 I was late home from work. So late that I only just caught the last post collection. The van was pulling up just as I left. I didn't have time to eat properly. Just about had time to cook pizza quick and had a couple of bits before setting off for astronomy club. We got there about 7.30. The car park was full again and we spent the start of the meeting standing up until some more chairs appeared. After the news of the week, one of the Steve's did a talk on telescopes. It was very interesting. As with most hobbies, all the individual parts soon add up to an expensive hobby. After the talk, I escaped to the kitchen to help with the washing up. It wasn't clear enough to get outside and look at the real thing so Drew gave us a tour with Stellarium. He also told us about the correct 13 star signs. According to this I am not a Leo, but Cancer. I prefer Leo! I think it suits me better. The 13th sign of the Zodiac is Ophiuchus represented by a man wrestling a serpent and was discarded by the Babylonians because they only wanted 12 constellations. 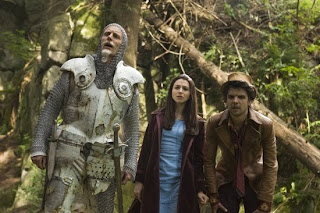 When we got home, I found a two part series called “Alice” based on Alice in Wonderland. It was very strange but I carried on watching it. It was made in 2009. Using the classic Lewis Carroll books Alice's Adventures in Wonderland and Through the Looking-Glass as a place to begin, writer/director Nick Willing (director of Syfy's Tin Man) has created the modern-day story of Alice Hamilton (Caterina Scorsone), a fiercely independent twenty-something who suddenly finds herself on the other side of a looking glass. She is a stranger in an outlandish city of twisted towers and casinos built out of playing cards, all under the rule of the deliciously devilish Queen of Hearts (Kathy Bates) who's not very happy about Alice's arrival.

In the course of her adventure, Alice enlists the help of an array of characters including the resistance fighter Hatter (Andrew-Lee Potts), resistance leader Dodo (Tim Curry) and the White Knight (Matt Frewer). Rounding out the cast are Colm Meaney as the King of Hearts, Harry Dean Stanton as Caterpillar, Alessandro Juliani as 9 of Clubs, Timothy Webber as Carpenter, Alex Diakun as Ratcatcher, and Eugene Lipinski as Doctors Dee and Dum.

It was good to see Colm Meaney in something again and of course Matt Frewer for the second time this week. I didn't set it to record as I had missed the first 8 minutes. I have now found the next showing of it to record so that Dave can watch it. Part two is also set to record next week.
Posted by Tia No comments: