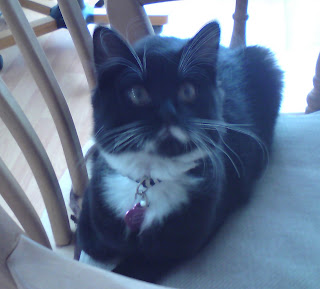 I’ve not long been back from collecting Kat from our friend’s house. It seems so far away but as about 90% of it is on the motorway, as long as it all keeps moving, it’s not too bad. I had a good run yesterday morning and this evening. Even the M25 was OK. Don’t let on to Kat though that it was OK or I guess I’ll be asked more often.

I had a lovely surprise today. I got up at about 9.30 expecting to have a day of housework and garden centres, only to find that I’d been invited to my niece’s roller party. I’m glad I wasn’t phoned at 7 am though when Aimee wanted to call me. It was a bit of a rush getting ready and I nearly decided that I wouldn’t be able to make it. Leaving it to the last minute as usual, dragging out my new roller blades that I hadn’t been out on yet, I dropped Dave off at the hospital to collect his car and made my way down to Hastings. I decided to use the sat nav as I wasn’t sure of exactly where this place was, except that it was off Bohemia Road somewhere. I followed the sat nav’s instructions and was surprised that it considered the A259 down to the old town and along the sea front to the White Rock Theatre as the fastest route but it would seem it was right. I was there in not time at all. As I arrived my Dad had only just parked up too. Once booted up, I joined the rest of the skaters on the floor only to witness my Dad falling straight over backwards and banging his head on the floor. There was blood too, Dave, so it must have hurt!! That put pay to his roller skating for the afternoon. Not too much damage done, not a deep cut but it’s going to go some lovely colours during the week and have a headache for a few days too. He had to sit with holding an ice pack on his head for ages.

After the party, I stopped off for a cuppa at Dad’s house and ended up staying longer than intended, as usual! I’d like to get to see the family more. The other distraction there now is their new kitten. He is gorgeous. He looks like a Manx cat without a tail. It is thought that he lost it after he was born. He has a really pretty face and is very cuddly. He was purring for ages, very contended. In answer to a question discussed today, how do cats purr, I’ve done a bit of research and this is the best info that I’ve found:

The purrsuit of happiness. Why (and how) cats purr.
Basically, an emotionally-charged cat gets a reflex from its central nervous system that signals the muscles in its voice box, (the laryngeal muscles) to tighten to the point that they vibrate with air coming in and out of the lungs. Which is why a cat purrs continuously, whether breathing in or out. No-one seems certain whether purring is a voluntary or involuntary sound.