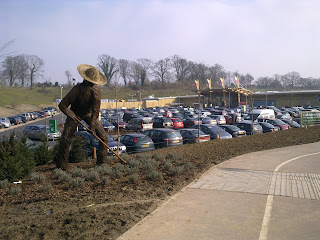 At lunch time I had another wander around Dobbie's. I will still be going to Pets At Home for the guinea pigs' stuff as they only have aquarium stuff. I didn't see any but I have heard that they have chickens there too. They do have a lovely card section. I was able to get a sympathy card for Christine as she had the call that she has been dreading for months. Her best friend died today. She has been in the hospice for a while now and been slowly getting worse. It's always sad when it happens but such a relief when someone has been suffering for so long.

I got a letter today from the Parking Services Department of Ashford Borough Council regarding the Penalty Charge Notice. I was impressed that they have replied within 2 weeks and more importantly that they have cancelled it. The photos taken of my car do not show the differences in the new yellow lines and the very faded ones. I didn't need to send them the photo that I took. The letter ends with, basically, don't do it again as I won't be so lucky to have it cancelled. Still hate traffic wardens!

This evening I called Julie to ask if Mum and Dad were OK as I haven't been able to get hold of them for a few days. It's OK, they are safe. I found out who the 3rd broken person is. It's Stephen, my nephew, he broke bones in his hand last Thursday and has been to East Grinstead today to get it pinned together. Sounds painful. I think I can now stop worrying about who the 3rd person was but I now also know two people who have broken their toes. As long as there's not a 3rd person out there with a foot injury?

At our Partylite Unit Training meeting, we waited ages for a new consultant to arrive and then she claimed she had broken down. Everyone was dubious as to whether she had even bothered to set out. So we started the meeting late with just the 5 of us. From now, the plan is not to have Unit Training meetings but to have special meetings by invitation tailored to consultant's needs. Sounds good. It will also mean that I won't miss as many bowling evenings as originally planned.
Posted by Tia