Today was Dobbie's Garden Centre official opening day so Christine and I decided to walk down there during our lunch break. We were so glad we walked as it was extremely busy. Their car park was full and the neighbouring car parks were being used. I wonder if this was pre-arranged with Beefeater and Travelodge? The shop looks great. I didn't get as far as the pet departments as this is not Christine's thing so I will have to drag Dave over there sometime soon. I got to look at the girly things. Mostly it is similar stuff to Bybrook. Christine said that she thinks they will do well and it could be the death of Bybrook. We'll see. Bybrook were petitioning against it being built. I can see why they were concerned. 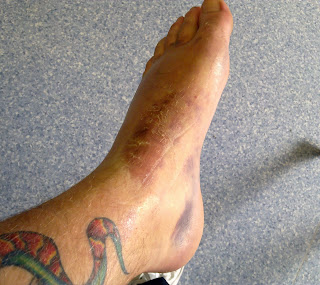 On the way back, I got some bad news from Dave. I always feel ill when he says Dan's ok but … This time he was sitting in A&E having dropped something very heavy on his foot. He got x-rayed eventually and he has two breaks in his ankle. Poor baby. I've not seen him yet, only Dave's photo. It's was looking very colourful already and I think it will be turning some very pretty purples over the next few days.

This afternoon, I was invited to the Microsoft Dynamics AX Kick Off meeting. This will be our replacement for our current CRM and accounting system. The plan is to get all company's over to the one platform, starting with the main offices in Canada, then we are 2nd. My manager, who was heading up the meeting, is due to go to Canada for meetings later this month and needs input from key users of the current system. She is an accountant first and foremost and needs to be able to make sure that we all get what we want to keep the business running smoothly. Having been to the first meeting I'm feeling a bit more keen on the change but not a lot. Why change something that is working for us! It is going to be a long road to the change and we don't see it happening in the next year. We've used the current system for 12 years now. I helped with that change over and the upgrade several years ago too. It was a lot of work on both occasions.
Posted by Tia