Stories from work today:
Firstly, a warning for the girls. Glynis's husband was driving through the shared space area in Ashford yesterday and there was a crowd of people waiting to cross, with quite an attractive girl at the front. As the car in front of him went past, he reached his hand out and dragged it across her breast. To say she was shocked was an understatement. I hope her friends were quick enough to get his number plate.

The other story was of a little boy in the bath with his Mummy. He said, “Mummy, don't move”. At first she was concerned that he'd seen a spider. Then he said, “Don't move, or it will go off”! Apparently he had seen the string from her Tampax and thought she was sitting on a party popper!! Bless! 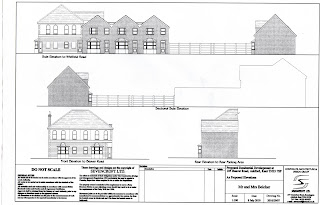 I went to a meeting this evening at the location of the recently vacated Powerbase building. A new business tried to continue there but this wasn't working for them. So they have now decided to develop the site into “one or two bedroom cottages”, as the letter said. Actually it is proposed that there will be 8 properties on the site. Two flats at the front, with 3 two bedroom houses behind and 3 bungalow style one bedroom places at the rear of the site. They have tried to keep in line with existing building plots, but may consider adjusting the angle of the rear properties to face outwards. Apparently there are also old fuel tanks underneath the land that will need to be removed. The proposed plans on the site are in keeping with the bay window Victorian design of the other houses here and they do look quite smart. My main concern that I raised was the parking. The owner has said that he is happy for us to use the forecourt and the space at the rear, if available, for the time prior to the development starting. After that, the new home owners will not have allotted parking and it will be a first come first served basis. As there is no garden space at all, these new places will not be aimed to be sold to families, single people and couples. I also mentioned that they consider that there could be a problem with drainage and water pressure into these places. Our houses are over 100 years old and it is likely the current pipes won't cope with the extra volume. Although keen to move on the project, as it is wasted now sitting empty, they don't envisage seeing the building work starting for maybe a couple of years by the time that they have got through the red tape. They might have a further invitation for the locals when they have moved on further with this. I think it will be good for us in the long run. Better to have good looking houses than run down businesses when it comes to our house prices!
Posted by Tia