We set off from Folkestone and headed off to Capel-le-ferne. Well, 5 of us went in the car, Dave and Steve went on the bus. When we arrived we waited for ages for them. Eventually we got out of the car to go searching for them. It transpired that they had sneaked into the pub for a crafty half. 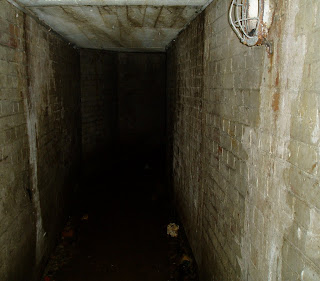 Having regrouped we set off up the foot paths along the cliffs. It was quite a trek, past a something large that we later found out was a sound mirror We soon found the holes that we were looking for. They barely looked big enough for a rabbit to get through but somehow most of us managed to climb into the darkness underground. It was DARK. Taking photos with the flash camera was interesting as just for an instant you could see what was there. Time for the torches. I went down the first hole but I didn't venture down the second one. I still don't know how Dave and Steve managed it. We went on to search for another entrance down the front of the cliff. Well, Steve and Batty did. Kat and I stayed up the top and had kittens with the boys being so close the edge! Down the third hole, there was a long corridor leading away from the light into the darkness and round a corner to another long corridor. This one had two battery rooms off it. 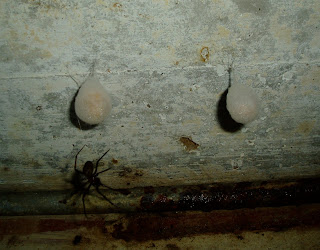 There were also lots of spiders and their sacks of babies hanging from the ceiling that were quite fascinating. Some people we know might have been scared of them. When we were heading out of the holes, Steve thought he was the last one out but Batty was hiding in the darkness and scared the living daylights out of him. Oh, we did laugh!! Think Steve needed new pants!

We walked on and found another underground feature to investigate. It meant climbing down a ventilation shaft. The others went down but I couldn't navigate myself over the edge so I looked after the coats and bags. I need to go down there one day. It sounded really interesting and the pictures looked good too. We then had the trek home back to the Royal Oak pub at Capel-le-ferne for a well deserved drink. Dave and Steve got the bus back and we picked up Dave in Folkestone before heading back to Ashford.
Posted by Tia