I was up at 20 past 8 and rushed off for a “potty emergency”. When I got back, I had a cup of tea and then made some coffee, the best way to make a slow start to the day. We had melon for starters and it was soon time to cook breakfast. After breakfast, I had to get ready to go. I then realised that I had lost my phone. Panic set in when I remembered the last time that I remembered having it was in the toilets. So I rushed there and no phone. Searched my bag and everywhere I could think of. I was fast running out of time. Then it was found by José in the pocket of the jumper I forgot I was wearing earlier. Panic over!

We got to Bethan's at 11 after the sat nav had taken us on a detour through Maidstone. Once we found out where Bethan's was, it would have been quicker to go down the motorway to the next junction than fight our way through the town. We set off by 11.30 and met every traffic jam possible. It took over an hour to get through the Dartford Tunnel so we had to make a stop at the Thurrock services, and at another one on the way. Well, we did have Sam with us who is 6+ months pregnant. We ate in the car to make up time. As there was an accident on the MI, Karen took charge with the road atlas and we ignored the sat nav and took the scenic route across country and through Loughborough. It took about 7 hours to get to Harrogate so it was officially a nightmare journey. When we set out, I think we were expecting 5 hours at the most. 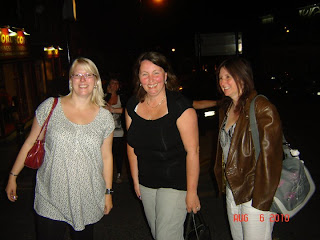 Once we had booked in, unpacked and changed, we met up with the girls to go and find somewhere to eat. We found an Italian restaurant not far from the hotel. The waiters invited us in to look at the menu properly when they spotted us checking the menu outside. The choices looked good and the prices reasonable so we decided to stay. It turned out that there was the Partylite management team there already as well as another large Partylite group. It was a great evening, the waiters were funny, the food was good. I had a lasagne. Sandra (the Managing Director) came round to see us a few times, each time introducing us to another member of the management team as her boyfriend and her fiancé, and then her finally her husband. On the way back to the hotel, we called into the Tesco Express for wine and snacks. Later we had a small pyjama party in our room.
Posted by Tia