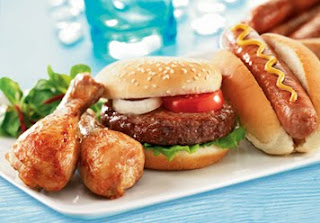 At lunch time, I went to Iceland to get some food for Saturday's BBQ. I had been checking on line and had an idea of what I wanted to get. They were recommending a deal on feeding 10 people for £20. I asked one of the guys filling a freezer if I would be able to do home delivery from the front of the store. Having queued for ages, I then found out that this had to be done at the till at the back of the store. I was sure that I have arranged for home delivery from the front tills before, and in the helpful member of staff's defence, he later said that it depends who's on the tills! This was delivered about 7pm.

This evening was one of my best home shows that I've had for a while. Emma and Nikki came along first, soon followed by Sammy and Heather. We were soon joined by Julie, and then Dellanie joined us too. Emma had been to a Partylite show before and loves it, but she hadn't had a “wax lesson” and didn't know about “hugging” pillar candles. I had only met Dellanie once before at a Pamper evening and she does Pampered Chef. We are planning to do a party swap later in the year.
Posted by Tia